Quebecois tunes on the harmonica: where to start?

In response to an inquiry, here is some information that may be helpful to those harmonica players who are seeking in-roads into the traditions of Quebec:

1. A good place to start is to listen to what harmonica players in Quebec have done. There is harmonica playing on the early Bottine Souriante recordings, Les Epousailles and Y a ben du changement.  Gabriel Labbe, who passed away in 2008, was the quintessential Quebecois mouth harp player and tune collector, and there is a Smithsonian Folkways recording featuring him. These a just a few places to start listening -- although Quebecois music seems to be dominated first by fiddlers, then by accordionists, there is actually a LOT of harmonica playing.  Seek and ye shall find.

2. Which tunes to start with? The tune collection Danse ce Soir contains loads of standards. 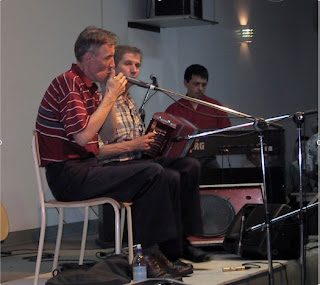 Left to right: Gabriel Labbe, Rejean Lizotte, and Denis Pepin at the Ste-Louise gathering, 2002.
Posted by VT_Andy at 10:51 AM