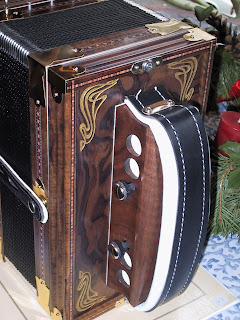 If you want to play Cajun music on a diatonic accordion, there is no question: even if you learn on a Hohner, you'll eventually want to upgrade to a Cajun-made accordion.
However, there are other types of music played on one-row accordions: English, French Canadian, and Irish trad have historically featured one-row accordions (along with other squeezable instruments).  So, if you play one (or more) of these types of music, is a Cajun-made accordion the right choice for you?
There are several points to consider:
1. Tuning: Cajuns tune their accordions in a manner that is not ideal for French Canadian, English, or Irish traditional music.  Without getting into details here, you will either need to find a Cajun builder who understands this and can adjust his tuning accordingly, or you will have to have a tuner work on the accordion after you buy it (this will likely cost between $100-$300 depending on the tuner).  Marc Savoy and Tina Pilione ("Acadian Accordions") have made accordions for French Canadian players and they have developed a tuning for these customers.  I used to have one of these boxes and can say that it is a suitable tuning for the music; however, it is not the manner in which Mélodie and Messervier (in Montmagny) tune their accordions.
2. Action and responsiveness: Not all Cajun accordions are created equally. Glowing references found on the internet are not necessarily written by people who really play the music. Caveat emptor!
3. Action, again: I've noticed that the rods connecting the button levers to the pallets, on many Cajun-made accordions, are rather flexible.  With time, the rods flex under pressure as the springs hold the pallets to the action board.  Eventually the button action becomes higher!  Note that the rods on a French Canadian accordion (such as Melodie) or an Italian made accordion are less flexible and will not develop this issue.  If it happens, it can be corrected.  But how far are you from Louisiana, and how much with the shipping cost? What will the builder charge to make this adjustment?
4. Overall build quality: I am a big fan of autodidacts -- people who teach themselves to do something.  At the same time, I recognize that self-taught accordion builders do not necessarily understand the consequences of their choices of material, joinery, finishes, glues, etc.  When you choose a Cajun accordion, keep this in mind.  It's a good reason to choose a builder who has been making a lot of boxes for a long time, i.e. Marc Savoy. Or, if you feel up to assessing the talent of a newer builder, try out one of his or her boxes before you decide to buy one.
5. Those four stops: I've heard that some Cajun builders tell their customers not to use the stops -- just keep them in the on position. According to those builders, the stops are only to be used by a person in the process of tuning the reeds.  In my estimation, this indicates that the builder lacks confidence in his ability to construct the stops in a mechanically durable, airtight manner.  In Cajun music, the four-voice sound is pretty much the standard, with rare exceptions.  However, in French Canadian, Irish, and English music, you will find occasion to use the stops to alter the sound of the accordion.  Seek out a builder who expresses confidence that you can raise and lower the stops on a daily basis without problem!
6. I have often been asked which one-row accordions I prefer.  I can only recommend the makers whose instruments I have tried and cannot speak to the quality of accordions that I have never played.  I have played many different Cajun boxes, and the ones that I have found to be the best, for non-Cajun music, were "Cajun" brand made by John Roger as well as "Acadian" brand made by Marc Savoy and Tina Pilione. That said, I would still encourage non-Cajun players to seek out Melodies (made by Sylvain Vezina) and Messerviers (made by Marcel Messervier Sr. and Marcel Messervier Jr.), as well as the Castagnari one-row melodeon, in order to establish some base-lines for comparison.  Try as many as you can.  Accordions from the same maker can differ widely in quality.
In the end, it will be your skills that contribute the most to your ability to capture the right "sound" for the type of music that you play. However, it has been my experience that the technical demands of French Canadian and Irish music are such that having a competent instrument should be your starting point, rather than an instrument that works against you.  And remember that a lot of great players play Hohners!
Postscript: If any Cajun builders would like me to review their boxes for use in French Canadian music, if you cover postage both ways I'll be more than happy to review your box. (If the review is negative (zero stars), I'll send you the review comments without publishing them; if the review is postive (one to three stars), I'll publish it.
Posted by VT_Andy at 6:18 AM