In praise of Max 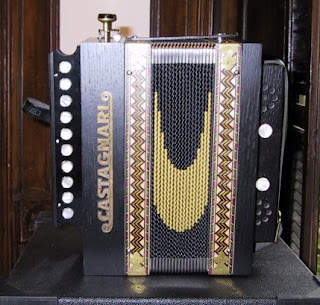 Ah, the Castagnari one-row "Melodeon," often (apparently incorrectly) dubbed "Max."
Among one-row Italian boxes, perhaps not such a strange beast. Among one-row boxes typically used in North America, Ireland, and the U.K., perhaps an odd bird.
What makes it odd? Is it the blazingly fast response of the reeds? The wonderfully light touch of the keyboard? The choice of oak and a unique and lovely intarsia for the meticulously constructed cabinet?
No, it is the placement of the air button.
My advice to players who find the air button difficult to use: get used to it. Adapt, just like you did when you started to play the accordion to begin with. If you really like this amazing little box for all kinds of reasons, get used to the air button.
I used to play one of these boxes -- I think that I had it for about a year. It was a wonderful box. If you are interested in accordion construction, take it apart and admire the evidence of the Castagnaris doing what the Castagnaris do so well.
There are several construction details that differ from most of Cajun and French Canadian boxes, which are all, to some degree, modern versions of German accordions that were manufactured about 100 years ago.
First, the reedblocks: there are two "stand up" treble blocks, and the bass/chord reeds on the left hand side are also mounted on a stand-up block. This differs from typical North American (i.e. Cajun and Québécois) accordions, in which two banks of treble reeds, and all the bass/chord reeds are mounted "flat." Castagnari has done something really unique, in the several of the highest reeds on the piccolo bank are also mounted flat.
Second, the bass "grip": Without going into more detail, the construction of this component differs greatly from anything made by a Cajun or Québécois builder. There is a different feel to the action and of course the air button is in a different position. Depending on how much cognitive and kinesthetic evolution has occurred between prehistoric man and the player of this box, it will take anywhere from one hour to six months for him to adapt his left hand to this difference.
Third, the reeds: The Voci Armoniche reeds are simply different critters than the Bincis that are typically (although not exclusively) installed in North American boxes.
Fourth, the keyboard: the "hidden" action in the keyboard is entirely different. The lever dimensions are also different (resulting in buttons that are much closer to the pallets -- a narrow keyboard).
I passed this box around to various box players in Quebec, and their responses can easily be summed up: "What a fast little box! Best keyboard I've ever played. Too bad it doesn't have the right sound for the music that I play!" On the other hand, one fiddler that I played with proclaimed that he "loved" the sound of this Castagnari, perhaps because the dry tuning appealed to him, perhaps because the sound was simply not as assertive as the typical Messervier box.
Eventually, I sold this box when my Mélodie arrived. If it had been in a different key (than D), I would have kept it. Ultimately, I wanted the more gravely, bassy sound of the Mélodie. However, I wanted to tip my hat to Castagnari for making such a unique melodeon -- which is wondeful to play.
Posted by VT_Andy at 4:33 PM