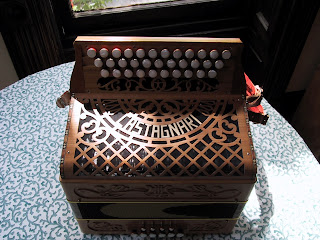 Question: A lot of French players seem to be using G/C boxes with a third row that makes the box chromatic.  What is the layout, and is this the most common layout for three-row accordions?

Answer: These are sometimes labeled G/C/alt, G/C/acc, or G/C/# (I believe you'll see them listed on French classified ads as "G/C alterations" or sometimes as G/C trois rangees).

The brief answer is that the layout for these boxes is not standardized.  They all involve an outer row in G, a middle row in C, and an inside row that includes notes that are not found on the outer 2 rows, as well as duplicated notes in the reversed bellows direction.

There are some websites where these layouts are posted.  The layouts are often named after the (French) player who uses or promotes the system. Examples here and here.

Q: Do most three-row diatonic accordions have a layout like that?

A: No. The vast majority of three-row diatonic accordions have what I would call the "standard three-row layout."  There are also an enormous number of three- and four-row "Steirische" accordions, which have what I would call a modified standard layout, but let's not get into that now.  Most Hohner three-row boxes, as well as Weltmeisters, as well as Gabbanellis and other boxes made for Tex-Mex, Norteno, Cojunto, and other Latin markets, have the "standard layout."

Q: Are you sure about this?  There seems to be a lot more talk on the internet about G/C/acc boxes.
A: Yes, that's true. But by sheer numbers (as opposed to internet participation), the "standard three-row boxes" probably outnumber all the other three-row layouts combined.

Q: Can you play tunes for G/C on a G/C/F accordion?
A: Yes.  But keep something in mind.  A G/C two row box usually has 8 basses/chords, with an F bass/chord that works in both bellows directions.  On a two-row box, this dual-direction bass/chord is a B-flat, and the F bass/chord (press) is paired with a C bass/chord (draw).
A three-row G/C/F with 12 basses/chords has the same basses as a C/F box, with the G press/D draw and E press/A draw of the G/C box.  In other words, a G/C/F doesn't have the F bass/chord on the draw.
Therefore, if you want to play "G/C tunes" (like those in French tunebooks) on a G/C/F, you have two choices:
1. Play them according to the tablature (same bellows directions etc.) except play them on the C/F row, as if those two rows were the G/C rows.
OR, if you must keep the tunes in the same keys as the sheet music,
2.  Play the tunes on the G/C rows, except that whenever the bass/chord F is indicated, you will play it entirely on the press, crossing on the inside (F) row.

Too complicated? Remember, one of the reasons that you play melodeon/diatonic accordion is to stave off Alzheimer's, right?

Q: You are advocating the "standard 3-row system," aren't you?
A: Actually, no.  I just think that potential diatonic accordion players, who are interested in exploring the three-row versions of the diatonic accordion, should be informed about the "standard" layout.  I think that many players are served very well by the options that the various French third-row layouts offer, especially if the player has really mastered the 2-row box -- the French 3-row layouts are, after all, extensions of the standard 2-row layout.

Q: Will I be able to play chromatically on a "standard 3-row" in G/C/F?
A: Yes and no. Let's talk about that in a future Melodeon Minute.

Q: One more question, is a "standard 3-row" kind of like three one-row melodeons, combined?
A: Yes, in the same way that an airplane is kind of like two wings, combined.  Seriously, it is true that a single row player will find that the three rows are like separate one-row boxes.  But one of the challenging -- and fun -- aspects of the three-row system is to find ways to combine all three rows to make the music sound the way you want it to sound!!!

Q: Which three-row boxes do you recommend?
A: I think that a well-tuned Hohner Corona is an excellent box.  And the newer Hohner XTreme line is wonderful.
I play a Castagnari Jacky in G/C/F (pictured above), which is essentially a limited edition Handry. The Jacky differs from the Handry cosmetically, but it also has a different grill, which is curved in a way that, I believe, allows the sound to project in a different way than the Handry.  I have tried several Handrys and always experienced a more "muffled" sound than the Jacky.
I have tried several Saltarelle "Laurentides" and find that it is an especially versatile box, especially in the LM tuning (with a stop).  However, several exemplars that I've tried have had oddly different spring pressure from button to button, which feels odd to play, as well as inconsistent tuning.  I also played the two Laurentides that Normand Miron (one of my favorite accordionists) plays, and he has them set up beautifully and they are wonderful.  So what I take from this is that the Laurentides is an excellent box, as long as you are prepared to have someone (like Normand, who does this kind of work) fine-tune the reeds and work on the action as well.
The Gaillard Saphir is of course an amazing pinnacle of 3-row melodeon enjoyability.  Play one at your own risk -- you may never be satisfied with anything less!
There are many makes and models of three-rows that are sold in France -- accordions which I have not yet had a chance to try.  Among them, several that are on the top of my list for test-drives are any three-rows made by Serafini, as well as the Beltuna (one is currently for sale at Button Box) and the Stelvio three-row models.
Posted by VT_Andy at 3:04 PM