On the option not listed... 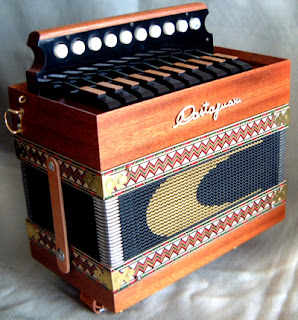 (Photo from the Button Box)

The Button Box now lists a Castagnari one-row melodeon in natural mahogany on its in-stock instruments page.
It's a new instrument.  And it's lovely, isn't it?
It's also interesting that Castagnari's current catalogue does not detail 'mahogany' as an option for the one-row melodeon: it is only available in black ("nero").
It really makes you wonder -- what can you get if you are willing to ask, rather than just choosing options from a list?
A friend told me a story about how he went to Castagnari to order his box in person.  One of the brothers spent time with him and let him choose what he wanted -- wood, inlays, grille pattern.  A few months later, he returned and picked up the instrument, which doesn't exactly correspond to any available model.

Those who aren't in driving distance to Recanati are perhaps within a day's travel to Sunderland, Massachusetts, where, apparently, rare instruments await you!

The melodeon in mahogany looks great, and if it plays like the other 3 or 4 one-row Castagnaris that I've played, its a wonderful instrument.  I still think that its the nicest keyboard of any one-row that I've tried.  As of today, I notice that Button Box currently states that this particular box is "on hold" -- but if it strikes your fancy, you know where to call to order another.
Posted by VT_Andy at 8:49 AM