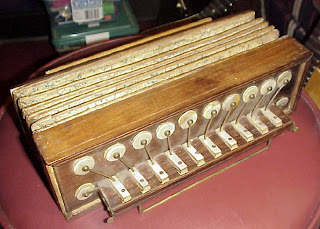 This is a picture of an "accordéon français," now commonly called a "flutina" -- just a very simple one, without fancy abalone or mother-of-pearl, without intricate marquetry or purfling. (I found this picture on the internet in 2003 -- perhaps on eBay -- and saved it for my reference.  If it belongs to you and you would like me to remove it, please send me a note and I will remove it promptly!)
These instruments were imported from France, en masse, to the United States in the late 19th century.  They are single-voice instruments, often with "drone" bass notes or tonic/dominant accompaniment notes.  Like melodeons, each bellows direction yields a different set of notes.
Their modern successors, if they have any, seem to be Castagnari's Lilly, Saltarelle's Epsilon, Loffet's Touptit, and of course, Stormy Hyde's Shantym'n.
However, all of the above feature eight bass/chord buttons on the left hand.  The old French flutinas, to the best of my knowledge, never had more than a few bass drones on the left hand.
I'm intrigued by these instruments, and although I've seen several, I've never had a functional/playable flutina in my hands!
Posted by VT_Andy at 6:35 AM