This clip (from YouTube) features melodeon.netter Owen offering a very nice interpretation of two tunes, both involving the use of the tricky-to-reach accidentals at the chin-end of the keyboard.
I found it interesting that he combined an English tune with a French Canadian "crooked" tune -- I've always felt that there was a kind of underwater connection between the two!  The latter tune is traditionally a fiddle tune, and I find Owen's interpretation for 2-row diatonic box remarkable -- bravo!


There is so much that can be done on one row!

Here is a clip of Frank Sears, one of the finest diatonic box players in Quebec! (Video from YouTube.)
Posted by VT_Andy at 2:47 PM 5 comments:

Here is a clip of Gaston Nolet (video from YouTube.), one of the masters of 3-row diatonic accordion playing in Quebec.  Watch carefully for his use of the "inconvenient" accidentals at the end of the keyboard closest to the chin.


I have heard Gaston Nolet in a variety of contexts over the years and have always appreciated the variety of tunes that he presents.  Gaston manages to preserve the jewel-like quality of each piece, yet commands a repertoire of staggering proportions.
Posted by VT_Andy at 10:52 AM No comments:

OK, folks, by popular demand, I've located a diagram of Marc Perrone's 3-row layout.  I remembered seeing this on a French trad music website that has since disappeared, so I delved into the internet archives and pulled this picture from beyond the grave. 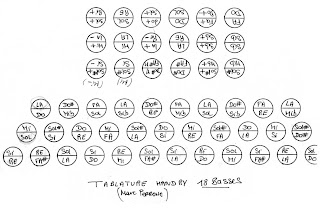 Thanks to Simon on melodeon.net, now we have an image of the layout (above).
Enjoy. Also: If Laurent wishes, I will gladly remove this image from the blog; thank you for the valuable information that was contained on trad.org! It is my understanding that this layout is a standard that can be ordered from Castagnari.

Now, that's what I'm talking about!


If I find myself daydreaming about learning to play the chromatic button accordion, I'm going to watch this again.  (Video from YouTube.) It's causing my kids to giggle quite a bit!
I wonder how many hours of Marc Perrone it will take to flush this out of my system?
Note for the uninitiated: No, that is not a melodeon.  But his audience doesn't seem to mind!
Posted by VT_Andy at 4:10 PM 1 comment:

Getting the most out of a 3-row box

This clip is amazing -- I could watch it a thousand more times! (Video from YouTube.)


I am not sure what kind of treble layout Marc Perrone is using in this clip.  My understanding is that he had eventually made it easier to play chromatically on the 3-row diatonic (which is already actually chromatic, just not "easily" played chromatically) by replacing redundant notes on the inner rows with "accidentals."  Thus, on a G/C/F box, where there are 'pressed' G's on the G row and the C row, one can replaced the C row's G's with G#, and likewise replace the F row's C's with C#.  There are also some redundant 'pulled' notes, which can be similarly substituted.  For instance, subbing Eb for some of the pulled E's, perhaps on the F row? (Addendum: indeed, the inside (F) row contains Eb's instead of E's!)
At one point, someone (probably in France) had this layout posted on a website, and now I can't find it and am clearly forgetting the details.  If anyone finds it, please let me know and I will edit this post, or create a new post about le maitre, Marc Perrone.
In the meanwhile, enjoy this old clip of some truly marvelous box playing!

FAQ #1: I want to play diatonic accordion, what kind should I get? 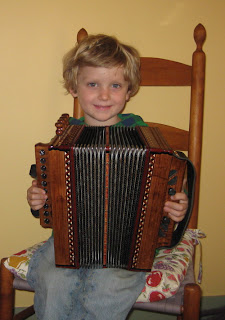 Q: I want to learn to play the diatonic accordion, what kind should I get?
A: It's really impossible to answer this question until you become somewhat clearer about what kind of music you would like to play.  We will have to figure out what keys are commonly played by diato players in a given tradition, and what kind of "system" is typically used.
Q: Okay, let's say that I want to play French Canadian tunes and some New England contra dance tunes -- what kind of box should I get?

A: Good, now that narrows it down.  A one-row box would make a good starting point, and the best key to choose would be D.  Alternatively, a D/G two row box, with eight bass/chord buttons would also work, although in that case, my suggestion would be to start by playing tunes on the D row only.  Finally, an A/D/G box would be fine, as long as you don't get bogged down early on with all the possibilities -- again, stick to the D row at first.

Q: Don't I need a one-row box in D with four stops for French Canadian music?
A: No.  It is an illusion created by distance and the internet, although it is true that one-row, four-stop boxes are now popular with many of the higher profile, advanced players in Québec.  Up close (i.e. in Quebec), one will see beginning players starting out on lots of different boxes.  Typically, the Hohner HA-series one-row boxes, whether they have two, three, or four stops are used, or other inexpensive one-row boxes.  If you want to buy a used one, you could call one of two shops where many players trade-in their beginner boxes when they upgrade: Messervier in Montmagny and Gagné in Québec City.  You could also give Mélodie a call.

Q: Do I absolutely need a one-row in D?
A: No.  It does seem like one-row boxes in C are more readily available.  You can learn all the techniques, and you can learn to play many tunes on a C box.  Just remember that you are essentially "tuned down" a whole step, so you'll learn tunes in C that are commonly played by other musicians in D.  If you plan to play with others, you should really try to find a D box.

Q: Would you make the same suggestion for Cajun music?
A: No.  Er, non.

Q: Care to elaborate?
A: Okay, but I don't play that kind of music.  You need a one-row in C.  Some Cajun players add other keys (starting with D) later, but it is entirely possible to learn all the techniques on a single box, a one-row in C, preferably with four stops.  Really, you should call Marc Savoy and ask him what he recommends for a beginner.

Q: I just changed my mind and want to learn "French" music and maybe some Breton tunes.  What now?
A: There is a very active culture of diatonic box "pedagogy" in France and Brittany, and there are several excellent book series dedicated to helping people learn to play multi-row diatonic boxes.  Beginners typically learn on G/C two row boxes (usually, 21 buttons) with 8 bass/chord buttons on the left side. I recommend the Pignol/Milleret books that are sold here.

Q: I just got a D/G box (see above) and now I want to play French music, do I need a G/C box?
A: You can actually keep the D/G and "pretend" that it is in G/C for purposes of using one of the French  books.  Each book features tablatures, so the fingering pattern is the same, it's just that the music that comes out of your D/G box will be a fifth higher in pitch.  Yes, that's quite a bit higher in pitch -- you will eventually want to get a G/C box, but try to learn the techniques first and see if you like it, then get the new box later.

I plan to write a series of posts about "frequently asked questions" concerning melodeons -- any suggestions?
Posted by VT_Andy at 10:02 AM 1 comment:

Apropos my post below about a key-switching 3-row melodeon, I would like to point out that they do already exist, as sold by Gabbanelli of Texas.
A few notes on Gabbanelli's two-tone:
1. The treble side is 2-voice MM in each key, as far as I know.
2. It features Gabbanelli's special look in celluloid.
3. It features the special feel and sound of Gabbanelli's reedwork.
4. I hope that someone will correct me if I'm wrong, but the bass/chords do not switch.

I have never tried a "two-tone" Gabbanelli, just about a dozen other Gabbanellis.  I would love for Gabbanelli to send me a "two-tone" for review on this blog.
Posted by VT_Andy at 3:14 PM No comments:

I just got home from a really wonderful session -- there are so many tunes!

Anyhow, the elbow-to-elbow crowded space made me more aware of how much space I'm taking up with multiple boxes.  I had my D one-row and three-row GCF.  There were two other accordionists who had multiple boxes.  A mandolin player and a banjo player also each had a melodeon.  At any given time, there were 3 to 5 boxes on the floor.

Then there are fiddlers, who of course manage to play every tune that comes up with just one instrument.  So at times like this, I envy the simplicity.

It would be nice if there was a handy three-row melodeon that "switched" keys -- with one set of reeds (single voice) in A/D/G and one set in G/C/F.  Single voice bass with bass fifths (instead of chords) that also switched.  Compact size.  Dark wood so as not to frighten the fiddlers.

This would not be an accordion to suit all needs.  But it would fill a gap, and it would solve the problem of too many instruments on the floor.

Alternatively, I could take up the fiddle.
Posted by VT_Andy at 1:16 AM 10 comments: