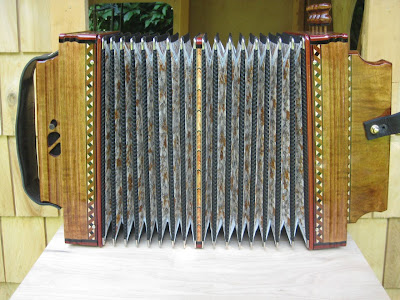 Certainly no melodeon would be complete without bellows... but what qualities make a set of bellows extra special? Mostly, while I'm playing, if the bellows are doing anything that makes me take notice of them at all -- creaking, sticking, wobbling, then something is wrong.
The bellows of my Mélodie were made by the family of the builder. The components -- made in Italy -- are readily available from several suppliers, and the cloth that creates a decorate appearance appears to be something that was picked up at a fabric store. It is also possible to use paper -- witness the excellent bellows that are installed on Castagnaris.
The bellows on the Mélodie open and close with ease, and are of course airtight. What more could I ask for?
Is there such a thing as 'bad' bellows? You bet -- I've tried some cheaply made boxes that had bellows that were so stiff that playing the instrument was a chore, resulting in a sore wrist.
Is the player's use of the bellows comparable to a fiddler's bowing? In some ways. On a one-row accordion, one does not have a choice between pressing and drawing the bellows for a given note. However, on a multi-row box, the choice between playing across the rows and maintaining the bellows direction versus reversing bellows direction does affect the articulation of the notes in a manner somewhat similar to bowing.
Posted by VT_Andy at 4:10 PM 2 comments: 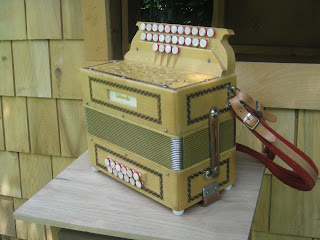 Like most melodeon players, I own several boxes. And while the most straightforward explanation is that they play in limited keys, we melodeonists all know that the keys are only a small part of the reason. There are so many potential configurations and tunings! Beyond that, and perhaps most importantly: the boxes seem to have individual character, something that evades description. A certain pleasure is derived from having a stable of boxes, each with a very unique sound and feel; one box is optimal for this or that tune, while another lends itself to a particular style.
This was certainly the case with the Piroulet. It was a 2 1/2 row, 12 bass melodeon built for Saltarelle, back in the days when no one -- beyond George Roux and some Italian accordion builders -- knows who really built Saltarelles. It is fitted with tipo a mano reeds in Bb/Eb, and the layout is "Milleret/Pignol" -- which is not surprising, since the original owner was Stephane Milleret. All I know is that he played it extensively and that reedwork was done by Pierry Giraud-Héraud, whose ballpoint pen notes are left on the bass reedblocks along with the year 1992. Its twin, played previously by Pignol, lives down the road
It was time to admit that I don't do too much Bb/Eb playing, despite its pleasant sound. I was pleased that a neighbor was interested in my Piroulet, so I can easily visit it in the future!
Adieu, Piroulet!
Posted by VT_Andy at 3:19 PM 2 comments: